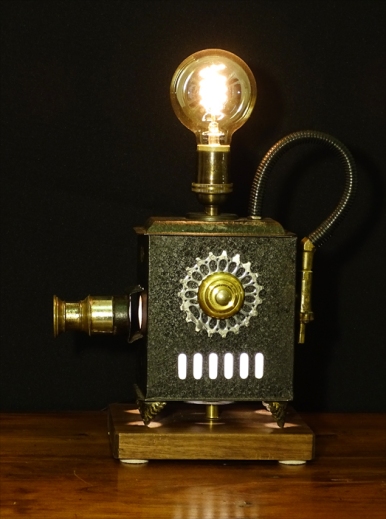 Magic Lanterns have been around since before the mid 17th century.  Originally used mostly for displaying silhouettes painted on glass slides, it became more popular in the second half of the 18th century as public entertainment at fairs – and the hand painted illustrations, often from multiple magic lanterns, were accompanied by a number of spectacular effects such as clouds of smoke, ratting chains and other sound effects.  A forerunner to the cinema!

This particular model is an early 20th century German-made magic lantern projector made by  Johann Falk Company of Nuremberg.  It has been repurposed into a quirky, steampunk lamp by the addition of some miscellaneous bits and pieces, a 40 watt reproduction Edison bulb plus an LED bulb in the interior that shines out the cut outs in the side, as well as through the projection lens.

All electrical parts are new. Supplied with approximately 6 feet of black vinyl cord with an in-line on/off switch.  Bulb shown is included.