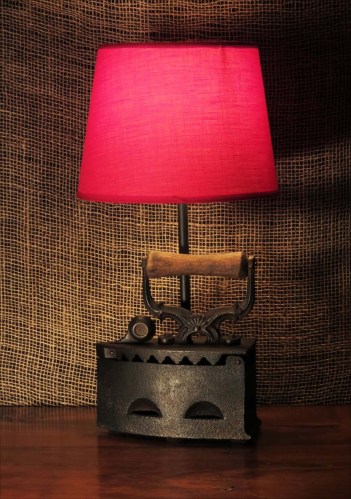 This baby weighs a ton and the (almost certainly) women who hefted this must have had arms of steel.  Domestic chores were not for weaklings.

This ‘box iron’, so called because it has a box (under the flip top) that glowing coals would have been placed in.  Hopefully, the coal dust wouldn’t get on the clothes!  This type of iron would keep hot longer than the flat iron that had to be heated on the stove – so women could keep ironing longer without those pesky breaks when the iron was heating.   This iron is likely from the late 19th century, as electric irons were in use by about 1900.

The red shade, as well as being pretty, echoes the glow of the coals.

All electrical parts are new. Supplied with approximately 6 feet of black vinyl cord with an in-line on/off switch.  Bulb not included.

Please be sure to read safety information before purchase.